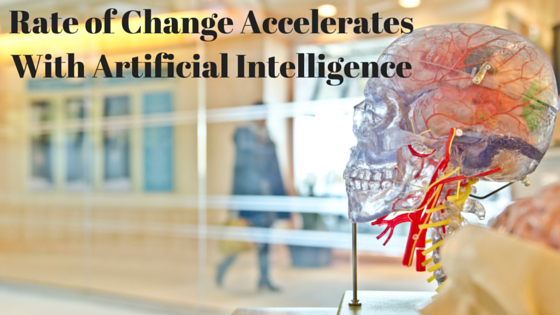 Humans have driven the growth of the technology field and have developed advances that have changed the way the world operates. We have worked to create systems and innovative technology that helps us become more and more efficient. However, we have recently reached a new peak in the field of technology that will entirely disrupt the norm. Artificial Intelligence (AI) is a groundbreaking development because it combines the savviness of a computer with the human spirit of curiosity and adaptability. Artificial Intelligence and cognitive computing teaches itself in many ways. However, we can’t expect it to miraculously come up with cures for illnesses or complete tasks that humans do not know how to do. Yet, AI still has the ability to analyze and interpret data that would otherwise be impossible for humans to make sense of within a plausible amount of time. This hybrid blend of cognitive computing is allowing the rate of change in the technology field to supersede anything we have ever experienced.

A specific example of advanced artificial intelligence is the landmark development of IBM’s Watson. According to IBM, Watson is an artificially intelligent computer system capable of answering questions posed in natural language, that was developed in IBM's DeepQA project by a research team led by principal investigator David Ferrucci.

Watson is designed to be spoken to, and to reply, in natural human language. We’re used to communicating with computers through icons and drop-down menus. Because Watson can learn, it can develop language skills, and that includes picking up all the subtle nuances, idiosyncrasies and colloquialisms of human language. This form of “computational linguistics” drops the level of specific technical expertise needed to put Watson to work down to zero, and eradicates a huge barrier that has traditionally been present in the relationship between man and machine. The human aspect of Watson helps set a new standard in the way that humans will be able to work with and rely on computers.

Although AI systems, such as Watson, can’t do what we aren’t capable of teaching it to do, it can process information immeasurably more rapidly than we are able to. Thus, if we teach AI all that we know and upload all of our data into the system, it is capable of finding patterns and possibilities quicker than we are able to—leading to the possibility of incredible discoveries that would otherwise not be found due to the time it would take human minds to process and interpret data.

Watson is creating a new era of computing—it blends the cognitive capabilities of humans and pairs it with the rapid-fire ability to analyze large sets of data in short periods of time. The capabilities of Artificial Intelligence, like Watson, are opening up possibilities that have never before been realistic. For instance, Watson has an entire division of its brand dedicated to oncology offerings. IBM states that Watson Oncology helps oncologists get the assistance they need to make more informed treatment decisions. Watson for Oncology analyzes a patient’s medical information against a vast array of data and expertise to provide evidence-based treatment options. This serves as a significant example of how cognitive computing and AI make a positive impact, yet it is still only a small representation of the magnitude of the effects that artificial intelligence can have on our world.

The closely-knit and strategic relationship of man and machine working together will continue to be the new normal of developing world-changing advancements. The potential of Watson and the already proven results of cognitive computing represent a huge leap forward in the symbiosis in the relationships between humans and technology. When the creative and relational capabilities of humans are paired with the speed and algorithms of technology, incredible discoveries can and will be made.