What Sectors Are The VC’s Investing In?

We thought we’d share some interesting investment data from Tomas Tunguz of Redpoint Investors relative to where the share of investment dollars has gone over the last twelve months.

According to Mattermark data, VCs have invested more than $57B in the last six months, which puts 2015 on pace to exceed 2000 for the year to deploy the most venture capital ever. Which sectors are benefitting from all of these venture dollars?

The chart below contrasts the top 12 sectors receiving venture funding in the US, and plots the relative share of dollars invested by month. The red line indicates the monthly data point, the thin blue line shows a linear regression trend line, and the shadow around the blue line is the area of standard error. 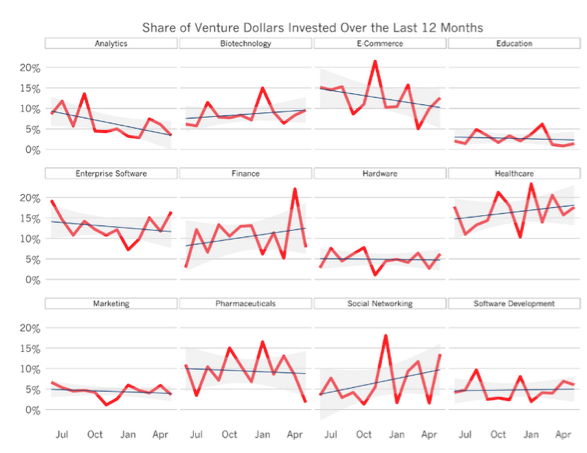 The sectors that are receiving an increasing amount of investment include biotechnology, financial technology, healthcare, and social networking. Meanwhile, analytics and commerce companies are raising less of a fraction of total dollars than they have in the past.

What is the data telling us? Well, several things—and amongst them is that technology continues to disrupt business as usual, and there is much more economic return from transforming things from the old to the new than simply making incremental improvements. When business learns how to scale at less cost everything changes and more people can benefit from these changes.

Think about how you do business and what could be done faster, at lower cost and higher quality because of digital optimization, but don’t waste too much time thinking about it. Just do it, or get some help thinking about how to do it.

Learning to Play the Game
What is Your Organization's EQ?