Douglas Belkin writes in the Wall Street Journal, “Four in 10 U.S. college students graduate without the complex reasoning skills to manage white-collar work, according to the results of a test of nearly 32,000 students.” 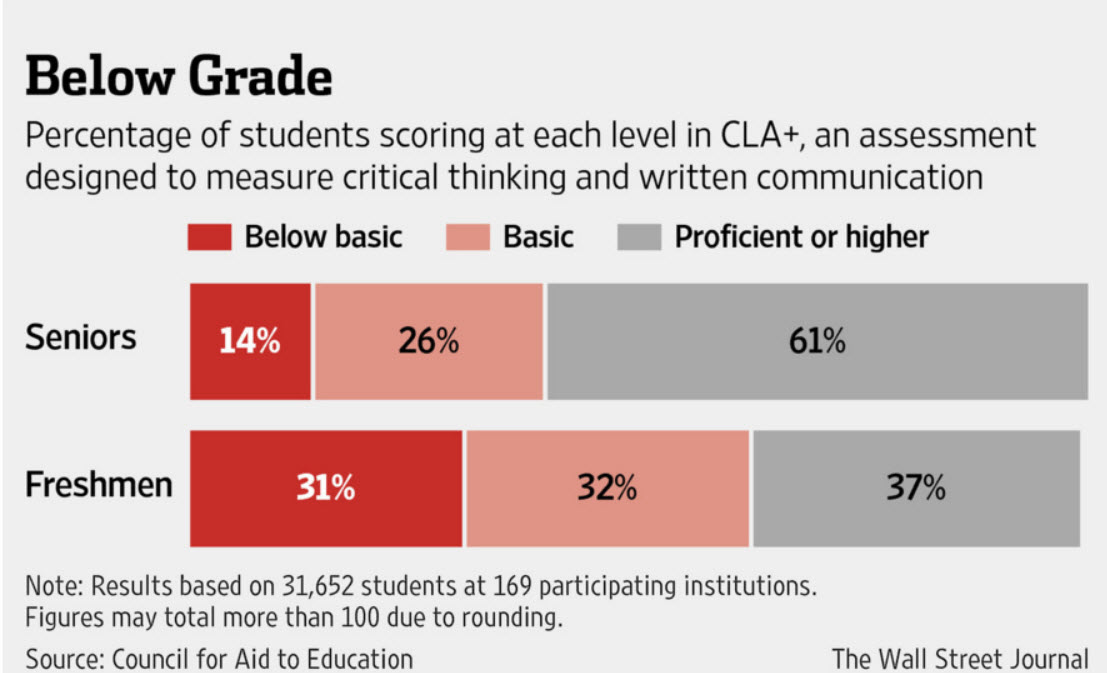 “The test, which was administered at 169 colleges and universities in 2013 and 2014 and released Thursday, reveals broad variation in the intellectual development of the nation’s students depending on the type and even location of the school they attend.” The results were influenced by a variety of factors, but show striking results.

“On average, students make strides in their ability to reason, but because so many start at such a deficit, many still graduate without the ability to read a scatterplot, construct a cohesive argument or identify a logical fallacy”.

“Even if there is notable growth over four years, many students are starting at such a low point they may still not be proficient at the point of graduation,” said Jessalynn K. James, a program manager at the Council for Aid to Education, which administered the test. The CAE is a New York-based nonprofit that once was part of Rand Corp.

The exam, known as the Collegiate Learning Assessment Plus, measures the intellectual gains made between freshman and senior year. The test doesn’t cover subject-area knowledge; rather it assesses things like critical thinking, analytical reasoning, document literacy, writing and communication—essentially mimicking the baseline demands for professionals.

So What Do Employers Expect?

A National Survey of Business and Nonprofit Leaders clearly stated their expectation from future student of today’s colleges:

The irony of this data is that technology is accelerating the demand for these skills. The pace of change and disruption are changing the formulas required to solve tomorrow’s problems. Thus, learning critical problem solving skills doesn’t end after college, it only just begins. Welcome to the 21st century virtual college called the web of learning!

The Demand for Certain Job Skills are Shifting
DevDigital's Involvement With LMS: MaxxContent