Learning to Play the Game

An old friend recently reminded me about the joy of learning how to play a game. On a recent visit to his parents’ home, my friend found an his old Risk game that he cherished as a teen. While he loved to play the game, it was one that he had yet to introduce to his children. So, on a quiet afternoon, he pulled out the game and started to teach the kids to play.

Brenda Brathwaite (Romero) and Ian Schrieber in their great book, Challenges for Game Designers, define a game as “An activity with rules… [and] a form of play often, but not always involving conflict, either with other players, with the game system itself, or with randomness/fate/luck.”

James Carse in his great book, Finite and Infinite Games, writes that “rules must be published prior to play, and the players must agree to them before play begins.” Carse continues to say that it is the “agreement of the players to the applicable rules [which] constitutes the ultimate validation of those rules.”

Carse points out that the rules “are valid only if and when players freely play by them.” If not, we are destined to have disinterested players leading us at best to an unfulfilling experience - at worst, to a failed attempt to play. Those of you who have tried to play a game of Monopoly with a player that refuses to engage in trading, for example, will have observed that the game grinds to an incredibly unfulfilling slog until someone eventually wins by attrition or the game is abandoned.

Therefore, so long as everybody agrees to the rules at the outset, the game is one players choose to freely play.
In order for everyone to agree, most every game can be boiled down to three main parts which, in a typical board game, are provided in the written rules as:

The first thing you’ll see when you pick up the rules is the objective. A simple sentence or two can inform the player of why we are playing the game. Without an understanding of why we play, the players cannot fully appreciate the process. Without an objective, the game becomes a chore rather than an adventure.

Brathwaite and Schrieber point out that in many games, the objective “may be connected to a theme” which helps frame “the single thing [the game] is about.” If the game’s objective cannot be encapsulated in a sentence or two, there is no game. (See the CoreX)

Once the player understands why they're playing, the next thing they need to know is how to operate within the confines of the game. The Mechanics of a game define what the steps are to compete in the game under the shared set of rules that all the players have agreed to. The rules answer questions such as:

It is the Mechanics which allow the players to learn how to see ahead, to make educated guesses about what will happen, and eventually become proficient at predicting the possible outcomes of play before their turn and the move into the next round. Obviously, it is with a fundamental understanding of the mechanics that we can start to map out strategies and tactics. In my opinion, this leads to what may be the most important part of the game. 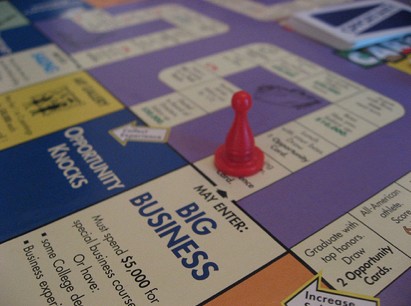 It is only with a clear understanding of the Win Condition (what we are trying to do) that we can fully realize what the strategy and tactics need to be. The Win Condition sets up a goal line to which all players can consent to trying to reach. The Win Condition will also inform the player how best to utilize the mechanics in order to play with a fully developed strategy.

For example in one scenario, we can play a game in which the End Game Scenario is created when one player causes another to expend all of their money, thus forcing them into bankruptcy (as in Monopoly). That game’s strategy is vastly different than one where we work with other players to achieve success by building off of one another’s success where the end of the game is reached based on who reaches a level of success first (as in Settlers of Catan).

Having a true understanding of what defines success in play can radically change the way a player makes decisions throughout the course of the game.

For example, the great game designer Sid Sackson creates a brilliant set of rules in his classic game Acquire in which he defines the Win Condition but then allows players to use the Win Condition, itself, as an element of the Mechanics of play. He added a single sentence to the rules that radically transformed the game from good to great. Sackson writes, “A player does not have to announce that the game is over if it is to his/her advantage to continue playing."

How might Sackson's End-Game Scenario change the way you play the game?

With this most simple notion, Sackson transformed the would-be simple acknowledgement that the game has ended into an integral part of the gameplay wherein players must be ever vigilant lest an opponent gain an advantage at the last moment and steal a win.

In the end, learning to play a game requires an understanding of why, how, and what in order to be successful (any Simon Sinek fans out there?).

Now let's put this in a business context. The Objective is your CoreX (Sinek's "Why," or what Nick Tasler calls the "Decision Point" in Why Quitters Win). The Mechanics are the how—how are you working to accomplish your objective. The Win Condition is the goal, the what—the definition of what constitutes success.

Like every game, constant practice and playing with those who are better than you are will sharpen your game and allow you to observe better and more complicated strategies. And like playing games, the more you play and then revisit the rules, the more likely you are to gain insights that you couldn't have caught when you first started.

Great game players constantly read about strategy to improve their play. Great poker players, chess players, even players of video games, get one strategy guidebook after another to help inform their game play. Great business leaders and entrepreneurs do the same.

How are you learning to play the game that is your business?

Are you playing with those who are better than you?

Are you revisiting your game rules regularly?

Are you reading up on strategy?

Remember in your organization that the rules “are valid only if and when [your co-workers/employees] freely play by them.” If not, you are destined to have disinterested “players” leading you… to where? An unfulfilling experience or to a failed attempt at your goals.

In order for everyone to agree, you’ll want to make sure those in your organization understand the objective, the mechanics, and the win condition. By bringing the ‘rule book’ to your organization, everybody can agree to the rules at the outset, and the game is one that players can freely choose to play.

How Often Should You Redesign Your Website?
Innovation in the Digital Era