The Tech Behind Stephen Hawking 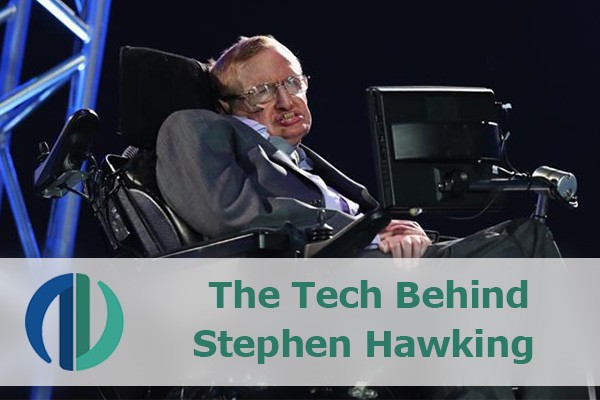 On March 14, 2018, the world lost Stephen Hawking, one of the greatest minds of our time. Hawking explained the universe to the masses and pioneered many discoveries concerning quantum gravity, general relativity, and cosmology. Although Stephen Hawking spent half of a century in a wheelchair due to ALS, he continued to research and share his discoveries with the world with the help of assistive technology. With assistive technology, Hawking could lead a more independent life that allowed him to continue to share his remarkable ideas with the world.

In 1985, Stephen Hawking lost his ability to speak, but this did not slow down his desire to communicate his ideas to the world. He began communicating by raising his eyebrows to certain letters on a card to spell out words. This process of selecting letters to form words was eventually developed into a computer-based communication system. Intel Corporation developed ACAT, an open source program, to use through the main interface of Hawking’s computer. This program displayed a keyboard on the screen to select letters to form words. An infrared switch was mounted on Hawking’s glasses to detect his cheek movement, which would then stop the cursor on the screen to select a letter. To help quicken this process, SwiftKey developed a word prediction algorithm. After building a sentence, Hawking would send it to his speech synthesizer, developed by Speech Plus. After years of development, this assistive technology created one of the recognizable voices of our generation.

Not only did this technology, ACAT,  allow Hawking to speak, but it also gave him the ability to control the mouse on his computer. He could check his e-mail through Microsoft Outlook, browse the web using Firefox, and write lectures using Microsoft Word. In fact, Hawking was able to give lectures by using Lecture Manager, a part of the ACAT software.

Stephen Hawking is an example of how technology can be a tool to help enable a person with a disability to continue to participate and contribute to society. Through his adult life, Hawking proved many theories, but one of his most astounding accomplishments was proved by his example: the mind can not be restricted by physical limitations.