From Products to Platforms: The New Normal 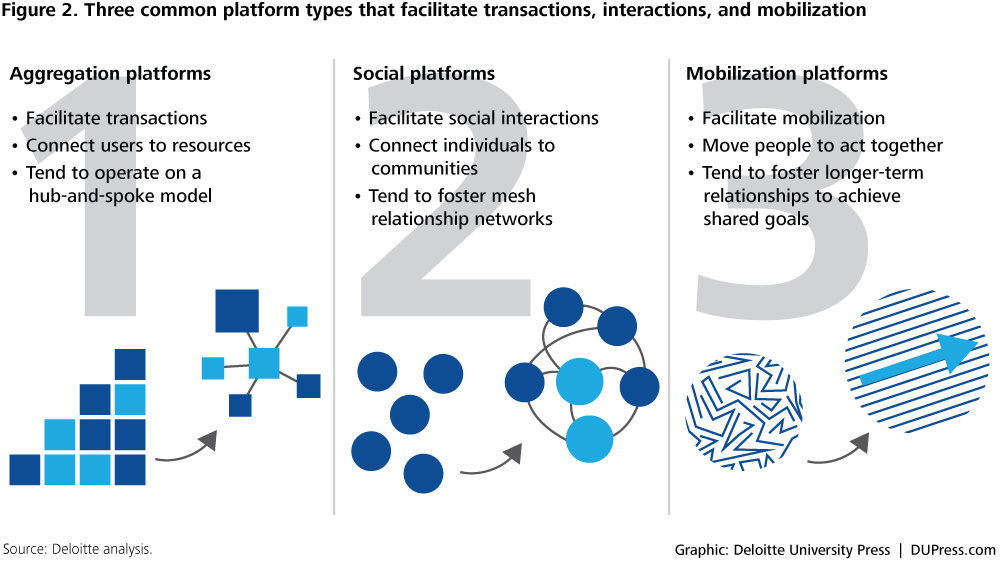 There is yet another shift in technology appearing on the horizon for those that care to pay attention. The so-called unicorns (aka private companies with over $1 billion valuation) are not selling a product but leverage a platform.  Beyond the Silicon Valley lingo, there is also a growing body of evidence dealing with platform businesses and business ecosystems. Every business has a lot to learn from this rising trend.

Today's unicorns are platforms, not products

Value creation now happens through stickiness of a platform rather than differentiated products. The equity of a brand is increasingly equivalent to the value of its ecosystem (value added by participants).

What is a platform ? In a platform approach, a company's business model (operating as a facilitator and a large part of the value) is created by the participants instead of the company itself—which can be Facebook users, Uber drivers, content providers for Learning Management Systems or makers of Apple-compatible accessories.

Again, nothing really new here as Tupperware or Avon sales have been operating this way for decades, the PC industry has thrived around the Wintel ecosystem, and Android and iOS have won the mobile OS war with their ability to attract and keep developers on their platforms rather than BlackBerry or Windows Mobile.

What is new though is that the platform approach have become the standard practice in the digital B2C space to compete for companies aiming to disrupt (another popular buzzword) the market, or create a new one.

Some of the most famous examples can be found in eCommerce (Amazon, Flipkart or Alibaba) or in messaging/social media (from Facebook to YouTube, Tencent or Snapchat). Online marketplaces such as Uber and AirBnB are currently some of the most prominent examples, getting as popular and powerful as Apple or Android.

A prerequisite for a successful platform is the ability for a company to build a value proposition around an ecosystem and not only its own products. This means convince 3rd party companies to join and share value with them. In software this is usually done by publishing public APIs. Arguably, the most successful ecosystem is the one orchestrated by Apple, where you don't only buy an iPhone, you get into the Apple ecosystem of hardware, content and services.

In the mobile apps space, an endless number of developers write apps for iOS and Android. Apple and Google provide the API, maintain the AppStore and give back 70% of the revenue to the developers. Hence, a platform can benefit but also become highly dependent on innovations developed by other firms.

Another component of platform is the ability to leverage network effects. For a thorough introduction to network effects and asymmetric business models, I highly recommend the comprehensive slidedeck by Anu Hariharan at Andreesen Horowitz. In short, network effects happen in product or a service value increase exponentially as the number of users goes up. A long time ago, it was the telephone line, then the fax machine and now more recently—Facebook.

Besides building a desirable product, "Growth hacking" is a key activity for start ups: reaching critical mass is the necessary extension to first mover advantage and is usually seen as more important than effective monetization. That approach is sustainable in the digital domain as cloud services make it easy to scale to impressive level while staying cheap: WhatsApp was able to serve 450 million customers with only 32 engineers.

In Platform Revolution: How Networked Markets are Transforming the Economy and How to Make Them Work for You, Geoffrey Parker, Marshall Van Alstyne, and Sangeet Choudary explain that moving from a traditional 'pipeline' model  to a platform involves three key shifts, which are quite suitable for agile startups.

More than a buzzword, the new normal for products.

Platforms are not only the latest Silicon Valley fad for building unicorns, but they have become the new normal to build and sustain a strategic advantage for any business of any size involved in any market. Like it or not, it is time to adjust to this new paradigm where even a great product cannot be successful for very long in isolation. Today’s winners understand the combined power of networks and eco-systems. It is a mind shift for us old guys, but a necessary shift to prosper in the 21st century.

DevDigital- May
The New Normal Workforce