What is Your Organization's EQ? 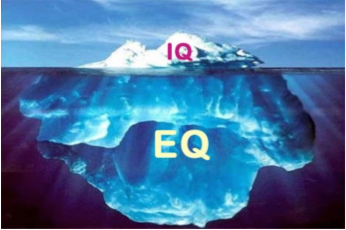 I’ve read with interest about individual emotional intelligence (EQ), and then I read an article that discussed organizational EQ.

In today’s digital world, the actions of an organization and its people are transparent. When it comes to attaining organizational success, EQ is more important than intelligence (IQ), yet leaders spend little time understanding it. As individuals, our success and the success of our organization today depends on our ability to read customer and market signals and react appropriately to them. Not reading them correctly can be disastrous.

Organizational EQ is best defined as "the ability to recognize the organization’s and other people's emotions, to discriminate between different feelings and label them appropriately, and to use emotional information to guide thinking and behavior." When it comes to improving individually, and improving the entire organization’s thinking and behavior patterns, there are negative and positive emotions that can be used as guides. Many organizations fall prey to catering to the lowest common denominator, rather than lifting everyone up to a higher denominator of EQ. The role of leadership is to lift an organization’s emotional intelligence up so that everyone’s EQ rises accordingly.

The four key elements of Organizational EQ can be understood in a shorthand version:

Self-awareness means having realistic self-confidence and knowing when to rely on individual views versus the team, as well as knowing what kinds of things set individuals off. Self-management requires you to keep those emotions in check and let others know what's wrong and provide a solution. When you are truly listening and can pick up on visual and verbal cues others are giving, you have the tools to act with empathy. Effective communication and being a team-oriented individual will help you with relationship management. To ignore any or all of these elements leads to selfish behavior that results in isolation. No organization or individual can afford to or even survive in isolation.

The Link Between Emotional Intelligence and Leadership:

Ultimately leadership is about getting along with other people. The business world functions because people - colleagues, employees, customers, suppliers - work together. Negotiation, haggling, sales, setting vision, strategy and goals, and other key business functions require us to collaborate and interact with others in a constructive way.

There is no way to take a test that ranks your organization’s EQ. The only real way is to listen and learn to listen real hard. Digital technology has enabled the voice of the market to speak with a loud voice and those that ignore the emotions of the market are doomed to fail.

Then there is another market that we need to hear—and that is the state of the emotional intelligence of our employees.  The challenge is logically sorting out the difference between healthy and unhealthy emotions and when it is time to address the causes of the unhealthy ones. Sooner or later those unhealthy emotions come out and influence others, including the customer.

The leader’s job is to help the unhealthy get healthy, or remove them so they don’t infect the healthy. Otherwise the healthy will find a healthier environment to work.  It’s a tough job, but no one ever said leadership was easy.

Learning to Play the Game
Is Your Site a Billboard in the Desert?